Portsmouth Historic Dockyard is an approximate 10 minute walk from our Southsea terminal or alternatively you can add HoverBus tickets, which will be waiting when you disembark the hovercraft in Southsea and will take you to Portsmouth The Hard in just 4 minutes.

Man the guns and hide the rum!

Climb on-board majestic warships, explore heroic submarines and uncover some of the navy’s best-kept secrets with first-hand accounts from the Royal Navy’s finest, past and present.

The Full Navy Ticket is the best value ticket and gives you access to this exciting new exhibition. The ticket will also give you entry to our historic ships, including the star of Portsmouth Historic Dockyard and Vice-Admiral Lord Nelson’s world-famous flagship HMS Victory, Queen Victoria’s HMS Warrior and the only surviving ship from the First World War’s Gallipoli campaign, HMS M.33. Take the waterbus to Gosport and explore Cold War submarine HMS Alliance where you will have the opportunity to look through her working periscopes, and see, hear and even smell how life was lived under the sea.

Your day out won’t be complete without an adventure-packed trip to Action Stations, where you can train like a Royal Marines Commando or try the Ninja Force assault course, an attraction based on TV’s popular Ninja Warrior series – the first of its kind in the UK. Add in a Harbour Tour to cruise around Portsmouth Harbour and see the ships of the modern Royal Navy.

As well as all the maritime history you could ask for, Portsmouth Historic Dockyard also offers a wide range of catering options for when you are ready to take a break from exploring. Choose from a variety including Costa Coffee, Boathouse #4 and the café on board HMS Warrior.

For those on the Isle of Wight who want to experience some of Britain's most historic attractions, you can fly from Ryde to Southsea in just 10 minutes on our hovercraft and with Portsmouth Historic Dockyard around a 15-minute walk along the seafront, you'll be there in no time! 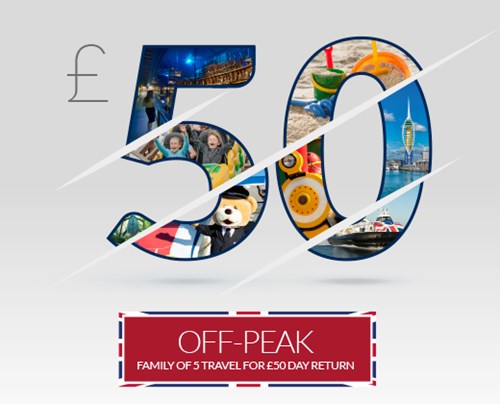 Fly a family of five across the Solent for only £50! >