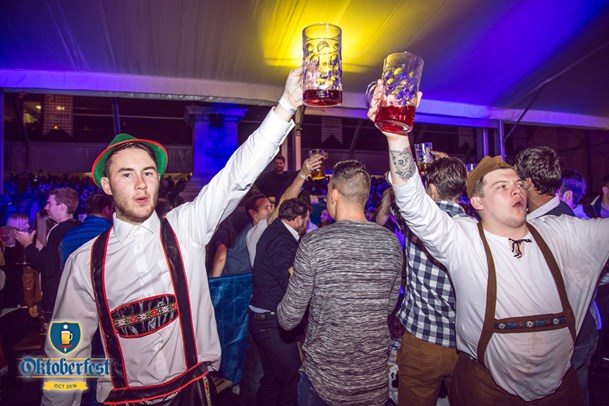 Oktoberfest is the Worlds largest beer and folk festival. It traditionally takes place in Munich, Germany from mid September and lasts 18 days.

The event has attracted an international following - last year 5.9 million people descended on Munich to attend while other cities across the world hold Oktoberfest style celebrations based on the Munich event.

During the festival, giant tents capable of holding thousands of revellers are erected and over 6 million litres of beer is drunk. Bavarian music plays in the afternoon and often gives way to more modern pop music in the evening.

In 2017 the event returned again with an amazing array of bands, music, food and fun! In 2018 the event decided to move to a slight bigger site in Southsea on Castle Fields again proving that Portsmouth really does love Oktoberfest!

In 2019 the event had a rest year ready for bring Oktoberfest back to Portsmouth & Southsea for 2020 where we aim to beat our record of 30,000 liters of bier, providing amazing food and of course the best Oktoberfest entertainment. Prost!

Take the Hovercraft from Ryde to Southsea, turn right when you get off and walk along the seafront for about 10 minutes.